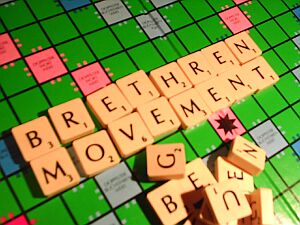 The Brethren Movement is one of the largest free-church movements in Germany (total membership: c. 40,000). However, as it is divided into several subgroups, some of them doing no public relations work at all, it doesn’t play a very conspicuous role in the German church scene.

This website, founded in October 2003, is a private initiative trying to show the specific aims of the Brethren Movement and the roots of its various subgroups. It provides information about the movement’s historical development as well as about its present-day situation, taking into account all relevant groups.

Most of the site is in German, but there are a number of English documents as well. They are listed below. You will also find many English entries on our international links and biography pages.

Please note that this website is a neutral resource of information and not an official site of any German Brethren group. If you want to respond to our site, please write us an e-mail message.

Anonymous: [Plymouth Brethren Controversy] (from: The Eclectic Review and The Inquirer, 1839/40). In May 1839, the politically and theologically liberal Dissenters’ magazine The Eclectic Review (ed. by Thomas Price) published one of the earliest critiques of the Brethren Movement. The Brethren-affiliated magazine The Inquirer (ed. by John Eliot Howard) issued two replies, which resulted in a controversy that lasted until March 1840. The six contributions are here compiled in one document [79 pages, 690 KB].

Anonymous: On Plymouth Brethrenism (from: The Evangelical Magazine and Missionary Chronicle, 1842). Another early critique of the doctrines and practices of the Brethren Movement, this time from a conservative Evangelical perspective [8 pages, 87 KB].

Henry Craik, Georg Müller et al.: The “Letter of the Ten” (1848). The first statement of the principles of “Open Brethren”, issued by the leaders of Bethesda Chapel, Bristol [6 pages, 48 KB].

Anonymous: A Retrospect of Events that have taken Place amongst the Brethren (with Appendix, 1849). Contemporary report and comment on the splits at Plymouth (1845) and Bristol (1848), written by a well-informed outsider. In an appendix, excerpts from important documents are compiled [42 pages, 302 KB].

Francis William Newman: Strivings after a more Primitive Christianity (from: Phases of Faith, 1850). Newman sympathized with the early Brethren Movement and assisted Anthony Norris Groves with his missionary work in Baghdad, but later turned away from Christianity. In the second chapter of his religious autobiography Phases of Faith he describes the influence John Nelson Darby (“the Irish clergyman”) had on him [13 pages, 122 KB].

John Nelson Darby: Early Beginnings (1853; from: The Christian’s Library, 1901). Notes of a report on the beginnings of the Brethren Movement in France, Switzerland and Germany, given by Darby on 24 November 1853 [8 pages, 182 KB].

Henry Morley: Brother Müller and his Orphan-Work (from: Household Words, 1857). This report, published in a widely-read journal edited by Charles Dickens, contributed substantially to the general recognition of George Müller's orphanage work. Contrary to popular belief, the author was not Dickens himself, but his collaborator Henry Morley (1822–1894), later professor of English literature [9 pages, 95 KB].

John Hall: The “Christian Brethren“ (from: The Evangelical Witness, and Presbyterian Review, 1863). Critique of the Brethren Movement in an Irish Reformed chuch magazine (on the author, see Wikipedia). With a corrective and a supportive letter to the editor [9 pages, 106 KB].

Early Open Brethren in the German-Speaking Countries. Excerpts from The Missionary Echo and Echoes of Service (1872–1918). These reports, hitherto overlooked by German Brethren historiography, are a first-rate source for the beginnings of Open Brethren in Germany, German-speaking Switzerland and Austria-Hungary [187 pages, 1406 KB].

“Criticus”: The Churches and Chapels of Nottingham: Their Ministers and Congregations. Amongst the Plymouth Brethren (from: The Nottingham & Midlands Counties Daily Express, 1878). A journalist’s report of a visit to the “Exclusive Brethren” assembly in Nottingham, Great Alfred Street [7 pages, 77 KB].

George Thomas Stokes: John Nelson Darby (from: The Contemporary Review, 1885). Not so much a biography of Darby as an analysis of the church-historical situation at the time of the early Brethren Movement. This often-cited article by an Irish church historian is here made conveniently available online for the first time [14 pages, 130 KB].

“A Peripatetic”: Unorthodox Coventry. Plymouth Brethren (from: Coventry Standard, 1889). A journalist’s report of visits to two Brethren assemblies in Coventry (Gospel meeting at the “Open Brethren” assembly in Cherry Street; breaking of bread and lecture by William Kelly at the “Kelly Brethren” assembly in Hales Street). With a letter to the editor by “Open Brother” Frederick Rose [8 pages, 83 KB].

John Dunlop: Dr. Laseron (from: Memories of Gospel Triumphs among the Jews during the Victorian Era, 1894). A short biography of the German-Jewish-born physician Michael Maximilian Augustus Henry Laseron (1819–1894), who founded an orphanage and a deaconesses’ institution in North London. He was a member of the “Open Brethren” assembly at Clapton Hall [7 pages, 78 KB].

Charles Brewer: Early Days in Herefordshire (from: Church Principles and Christian Practice, 1898). Memories of the beginnings of the Brethren Movement in the Hereford area. Important source for all later accounts [9 pages, 92 KB].

William Collingwood: The “Brethren”: A Historical Sketch (1899). A brief survey of the history and principles of the Brethren from an “Open” point of view [12 pages, 98 KB].

William Blair Neatby: Mr. William Kelly as a Theologian (from: The Expositor, 1907). A short introduction to the theology of William Kelly (ecclesiology, eschatology, christology, soteriology) and thus to essential doctrines of the “Brethren” in general [11 pages, 108 KB].

“Ecclesiasticus” (= Alexander Gammie): Byeways of Religious Life in Aberdeen. Among the Plymouth Brethren (from: Aberdeen Daily Journal, 1908). A journalist’s report of a visit to the “Open Brethren” assembly in Aberdeen, St Paul Street [5 pages, 50 KB].

Edward Elihu Whitfield: Plymouth Brethren (from: The New Schaff-Herzog Encyclopedia of Religious Knowledge, 1911). A fairly objective account of the history and teachings of the Brethren. The author was a member of the Stuart Brethren [8 pages, 82 KB].

Anonymous: The Wanderer at Church. The Foresters’ Hall (from: The Thanet Advertiser, 1915). A journalist’s report of a visit to the Brethren assembly at Foresters’ Hall, Ramsgate, Kent (probably a “Kelly” meeting since the hymn book mentioned, Good Tidings, was issued by the Kelly publishers Race and Hammond) [6 pages, 79 KB].

George Henry Lang: Observations upon The Union of Freechurch Christians in Germany (1938). Criticism by an English “Open Brother” of the organization formed by the German Brethren in 1937. Typescript, previously unpublished [20 pages, 154 KB].

Peter L. Embley: The Early Development of the Plymouth Brethren (from: Patterns of Sectarianism, 1967). A condensed version of the aforementioned Ph.D. thesis [21 pages, 206 KB].

Cecil Howley: Harold Primrose Barker (from: The Witness, 1968). Short biography of a former “Raven” and “Glanton Brother” who turned “Open” in the 1920s and justified this step in the widely-read pamphlet Why I Abandoned Exclusivism [6 pages, 79 KB].

Ian S. Rennie: Aspects of Christian Brethren Spirituality (from: Alive to God, 1992). An examination of Brethren piety in the context of 19th-century British Evangelicalism, focusing on bibliology, prophecy, separation, charismaticism and hyper-Calvinism. The author (1929–2015) was a professor of church history at Regent College (Vancouver) and Tyndale Seminary (Toronto) [17 pages, 181 KB].

Max S. Weremchuk: Can We Recover the Brethren Legacy? (1998). An appeal to the “Reunited” (KLCG) Brethren to develop a positive attitude towards variety and to learn from other Christian groups [16 pages, 109 KB].

Lake Geneva Conference Report (1999). The proceedings of a “Reunited” (KLCG) conference in the United States trying to ascertain the principles of gathering from Scripture itself without referring to Brethren writings [60 pages, 258 KB].

Philip Nunn: Observations and Reflections of a Concerned Missionary (2002). Thoughts about current trends among the “Reunited” (KLCG) Brethren. The author was working as a missionary in Armenia, Colombia [22 pages, 147 KB].

Philip Nunn: The Re-dividing of the Reunited Brethren (2003). An analysis of the causes of the current process of disintegration among the “Reunited” (KLCG) Brethren [52 pages, 332 KB].

Max S. Weremchuk: John Nelson Darby Research Papers (2003–2007). In the 2000s Max Weremchuk worked on a revision of his Darby biography (1992) and published his new findings serially at the MyBrethren website before he decided to abandon the project. As that website was closed in November 2017, the material is reissued here (in a slightly edited form) [45 pages, 345 KB].